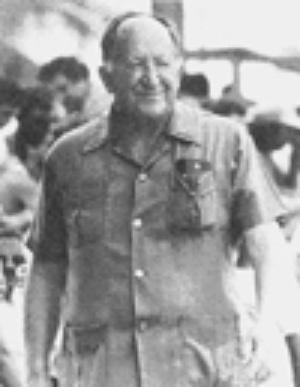 After starting the international push of Australian Football into Papua New Guinea in the 1950’s, Hunter Harrison immediately assumed various roles in the NTFL upon arriving in Darwin in 1961 including League President for three successful and productive stints in 1964-65, 1969-77 and 1980-87.

His collection of trophies acknowledge his tireless endeavours as an administrator including NTFL Life Member in 1971, the coveted Silver Jubilee Award for Outstanding Service to Football in 1977 and a very worthy MBE in 1979, the year in which the stand at Gardens Oval was named in his honour. He is also a Life Member of the Australian Football Council and the Teal Cup second division best and fairest medal was named in his honour.

The NT’s success at the 1988 Bicentennial Carnival saw the NT being recognised nationally as a force to be reckoned with and was the culmination of many years of his outstanding administration.

NT Football would not be where it is today without Hunter Harrison and it is an honor to induct him into the AFLNT Hall of Fame.